The UK has once again bolstered its position as one of the most clean-energy supporting and forward thinking countries in the world. The UK government has given consent for a tidal lagoon to be constructed in south Wales; it is set to cost a staggering $1.6 billion.
The scheme was initially put forward in 2014 as part the UK’s National Infrastructure Plan and was granted permission. However, the scheme did almost collapse last year over price concerns, with the government concerned about the price it would pay for electricity created. Even the then British Prime Minister, David Cameron, announced that his enthusiasm for the project had been ‘reduced’ by the costing.
The review carried out by Charles Hendry, a former energy minister, found that the lifetime cost of the project was low. He said: “If you look at the cost spread out over the entire lifetime - 120 years for the project - it comes out at about 30p per household for the next 30 years. That's less than a pint of milk.”
Mr Hendry, who has been collecting evidence for the past year, said the project was a “significant economic opportunity”, and would make a "strong contribution" to Britain's future energy supply.
To date, about $43m has been spent on project development, and with the exception of a commercial loan from Welsh government this has been financed privately.


Tidal Lagoon Power aims to start on site in 2018. It estimates that project will take four years to build, with first power generated in year three. 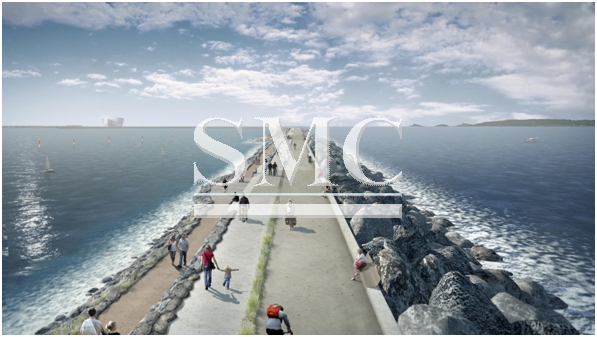