Shanghai to Beijing in 2 hours… impressive

As the Chinese momentum in rail innovation continues to roll forward, we could soon see trains transiting between Shanghai and Beijing reaching 600km/h and completing the journey in just 2 hours, the current time taken to make this journey is 5 hours.
CRRC Corp Ltd, the largest manufacturer of rail equipment in China, announced that they have begun researching and developing (R&D) a new type of Maglev train that has the potential to reach speeds of 600 km/h, which will comfortably surpass any train currently in operation. They announced they will be constructing a project-specific 5km track, when they finally build the new train in order to test it.
Maglev is short for "magnetic levitation." Instead of running on fossil fuels, these types of trains run on magnets and electric currents, smoothly gliding above the track. CRRC says that it will need to improve its levitation and traction technology before developing this next set of maglevs.
It’s not actually too much of a concern as to whether they can build a train which can reach 600 km/h, Japan has already proven it’s doable, when in April they broke their own speed record with a record of 603 km/h. However, Japans attempt was also just a test, the commercial use of these trains is still a long way off with a number of concerns still needing assurance.


However, it is not just domestically that China are attempting to improve the efficiency of rail travel, they are on a mission to implement their world-class engineering globally. There are currently bids in place to build high speed rail networks in the UK, Australia, Southeast Asia, Iran and Mexico, whilst 3’000km of railway in Turkey, Thailand, Indonesia and Russia are already under construction. 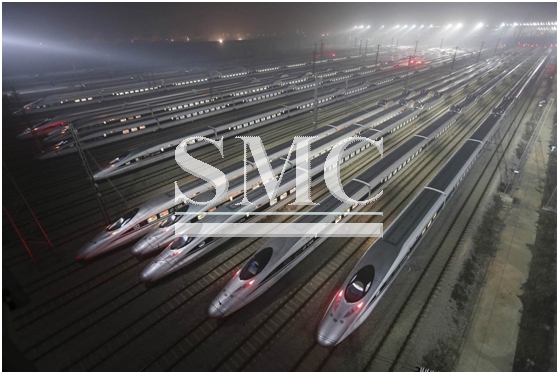