Point fixed glass systems are used most frequently in structural glass curtain walls to create transparency and depth of vision for the occupants.

The glass panes are either bolted or clamped with components providing attachment to the structural system. The most common system type is often referred to as a “spider” system. The metallic fingers that support the glass façades allow the designer to increase transparency by minimizing the structural framing. Refer to Center for Window & Cladding Technology for further info.

A four- armed fitting, usually of cast stainless steel, supports four glass panes at adjacent corners on the glazing grid and ties back to the structural system. The spider fitting is designed to provide for glazing system movement under environmental loading, as well as to accommodate specified field tolerance during assembly. A variety of spider systems are available from the suppliers of cable and rod rigging systems.

Cast stainless components can be quite expensive, especially if large, customs spiders are required, as they often are in large glass grids. Alternatively simple stainless spring plates have been used in place of a cast fitting with excellent results.

The approach for the point-fixing of glass, since the development of the suspended glass wall, has been mechanical attachment with a fitting that accommodates a bolt through a hole drilled in the glass panel that ties it to supporting structure.

Multi-layer glass panels presented a particular problem at the start of the point-fixed systems. A method had to be found to seal around the fixing component so as not to compromise the air cavity of the panel.

Glass manufacturers and fabricators developed a ringed spacer that could be sealed around the holes to this purpose. This development has made the sourcing of this type of product become easier and more competitive worldwide.

Toughened glass is a requirement to accommodate the stresses concentrations resulting from bolting directly to glass façade plates. Planar fittings support the dead weight of the glass by direct bearing on the bolts, so it is critical to maximize the strength of the glass around these joints.

The bolt holes are diamond drilled into annealed glass and subsequently heat soaked to assure that nickel sulphide inclusions do not cause spontaneous fracture of finished glass panels. Check Pilkington planar systems for more details and info.

Bolted method of point fixing has the disadvantage of requiring drilling and countersinking of the glass panes, and with insulated glass units the insertion of a sealing ring in the space between the glass panes around the bolt hole.

Each laminated or insulated glass unit requires the drilling of at least eight holes. Insulated-laminated panes require a minimum of 12 holes. Obviously, this adds to the cost of the glass panels.

An alternate approach that eliminates the need for drilling and instead clamps the glass at the perimeter is frequently referred to as a “pinch-plate” system. With a spider-type system, the spider component is rotated 45 degrees so that the spider arms are aligned with the glass seams.

A narrow blade of metal penetrates from the spider through the center of and parallel to the glass joint. A relatively small clamp plate on the outside surface of the glazing plane is then fixed to the blade, clamping in place the two glass panels on either side of the seam. 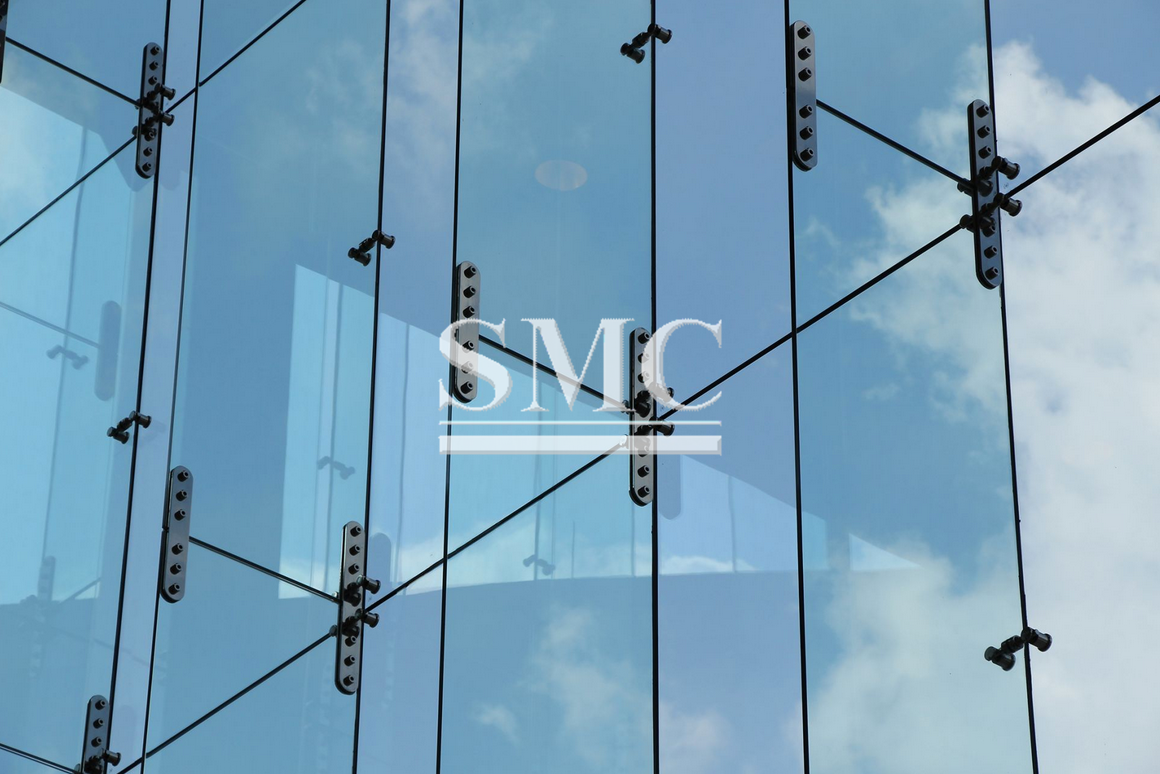 Another approach, frequently employed on cable nets, is to set the glass into a specially designed clamp component tied to the supporting structure. A cover plate is then attached over the outside corners of the glass, effectively clamping the glass at the corners. Neoprene pads are used on both faces of the clamps to protect the glass. Check Glass Association Of North America for more details and info.

Some technical points to ponder

The maximum span for bolted clamp plates of toughened glass is usually given by the manufactures technical data sheets as a guide line for the designer to consider.

An important criterion is the deflection of the point fixed glass systems, which can be predicted using rules of thumb or by doing a finite element analysis. If the expected deflection is more than one half of the glass thickness then its behavior cannot always be sufficiently represented by linear models. The method of calculation is determined by the out of plane rotations of the glass surface. Check Extreme Loading site for an example of glass performance analysis.

The deflection of the point fixed glass facade is also important where the sway of the entire structure is being considered. Glass walls can be designed to have low stiffness and tolerate large deflections.

The limit of deflections is determined by human perception of safety usually outlined in codes of practice. Check International Code Council for further info. Some glass manufacturers produce their system of joints such that the connection between the bolt and the glass is capable of carrying a small bending moment.

Others make their systems allow rotation of the glass relative to the joint. Check Structural Glass Manufacturer & Pilkington sites for more details and info. Therefore, a detailed understanding of the allowable movement of the point fixed glass façade is required before doing any finite element analysis.

Deformations are elastic until they aggravate inherent flaws in the material and tiny cracks reach a critical length. If the flaw occurs near a concentration of stresses around a bolt, then the panel tensile stress resistance is reduced causing failure.